3.3 Is the EA 18G Growler Jet Substantially Different from the F18 Hornet Jet?

In a previous article, we showed that the EA06 Prowler jets hardly ever crashed while the F18 Hornet/Growler jets crash 36 times more often. We concluded this was due to the speed of the new jets (1200 miles per hour) versus the speed of the old jets (600 miles per hour). A Navy person claimed that our study was not accurate because the “EA18G Growler Jet is different from the F18 Hornet and F18 Super Hornet jets”. The question is what has caused all of the F18 Hornets and Super Hornets to crash and whether this would also cause Growler jets to crash more often that the older Prowler jets. We will therefore examine these differences in detail. 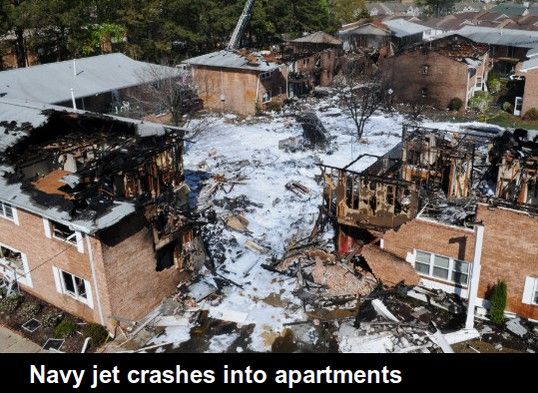 Here is a quote from a military contractor who makes parts for the 18E, the 18F and the 18G:
“The aircraft (FA 18 E Single seater Super Hornet, FA 18F Double Seater Super Hornet and EA 18G Growler Double Seater Super Hornet with a couple of pods under the wings) is powered by two General Electric augmented turbofan engines rated at 22,000 lb of thrust. A mid-span leading-edge sawtooth helps maintain aileron effectiveness and provides a high degree of maneuverability for the dog fighting role. Maximum speed exceeds Mach 1.7. The F-18 was the first US fighter capable of supersonic speeds without the use of afterburners. The F/A-18E/F is replacing the F-14 Tomcat, the A-6 Intruder, the F/A-18 A/B, older F/A-18 C/D’s, and the EA-18G will replace the EA-6B, and will operate from the nation’s aircraft carriers.”
https://www.eaton.com/ecm/groups/public/%40pub/%40eaton/%40aero/documents/content/ct_196796.pdf

Let's try to put the above quote into plain English.

3.1 How Humans will be harmed by turning the Olympic Peninsula into a War Zone

There will be at least three ways that humans will be harmed by turning the Olympic Peninsula into a war zone. These are economic harm from loss of tourism, physical and emotional harm from extreme noise and third long term adverse effects from high powered electromagnetic radiation. In this article, we will briefly review these three adverse effects.

Read more: 3.1 How Humans will be harmed by turning the Olympic Peninsula into a War Zone

How Electromagnetic Radiation Harms People
Chronic electromagnetic radiation from the 100 plus Growler jets every day will likely be the most harmful long term effect of living in or visiting an Electromagnetic War Zone. The problem with chronic exposure to radiation is that cancer takes up to 25 years to manifest itself. So the Navy can be killing American citizens for 25 years before it has a major observable effect. Even then, the Navy can claim that the cancer is due to second hand cigarette smoke or some other environmental hazard. Over 20 scientists have submitted detailed analysis of this radiation hazard to the Forest Service. Here we will only briefly summarize some of their major findings. First, we will begin with a brief overview of how electromagnetic radiation interacts with living cells.

What is electromagnetic radiation?
Electromagnetic radiation is energy including energy coming from our sun. We can think of energy as a particle, called a photon, which travels at the speed of light – because it is light.
However, we can also think of energy as an electromagnetic wave – because it is also the basis of electromagnetism. This is called wave- particle duality because energy generally acts as a wave – such as the circle of ripples spreading out in a pond – but energy also can act as a particle such as when a photon of high energy light strikes and breaks up a portion of human cells.

Energy is divided into several categories
Energy comes in a range of vibrations from very high energy – which has a very short wave length – to very low energy which has a very long wave length. High energy includes Gamma Rays, X Rays and Ultra Violet Light. Low energy includes Infrared radiation, terahertz radiation, microwave radiation and radio waves. In between these two extremes is visible light which runs from blue light at one end to red light at the other. This range of energy types is called the electromagnetic spectrum.

Gamma rays and X rays generally do not make it to the surface of the earth because they are blocked out my the ionosphere in our upper atmosphere. However, medical machines produce X rays and they should be limited because they can cause cancer. The military has been accused of creating Gamma ray and X ray weapons which is why there is a general distrust of the military. Such weapons could kill all life in a region without affecting any of the physical buildings. This type of radiation is called “ionizing” radiation because it physically alters the nature of living cells. All other forms of radiation are called “non-ionizing” radiation.

Visible light is generally not regarded as a problem because living organisms have adapted over billions of years to deal with this form of radiation.

Infrared radiation, also called heat, rises off of all living creatures. This is how “night goggles” work by making this heat visible. Because living organisms have adapted to infrared radiation, it is not generally regarded as dangerous.

Radio Waves are the longest and least energetic of all forms of radiation. They are so weak that they are not generally regarded as dangerous. Radio waves are used for radio communication. They are also used for some forms of RADAR. However, the military has used other forms of electromagnetic radiation besides radio waves for RADAR.

Because the military has a history of not being honest or concerned for safety, there is a general distrust of the military. This is why the public is demanding answers to questions about exactly what the Navy has planned for their Electromagnetic Warfare Range. The public wants to know exactly what forms of electromagnetic energy the military plans to use in their interactions between ground transmitters and jet transmitters.

The US Navy would like us to believe that there is no real difference between the older Prowler Electronic Warfare jets and the new Growler Electronic Warfare jets. They have even given their new jets a similar sounding name to their old jets in order to confuse us. The Navy has claimed in many legal documents that there is “no significant difference between the new jets and the old jets. However, the new Growler jets are nothing at all like the old Prowler jets. Growler jets fly twice as fast as Prowler jets (1200 miles per hour versus 600 miles per hour). They have engines that are much bigger and more powerful with nearly twice the amount of thrust. This is one of the reasons that Growler jets are much louder than Prowler jets (the other reason being that Growlers are less aerodynamically shaped than Prowler jets which cause more turbulence).

Below are a table on graph of these incidents over the past 35 years confirming this fact. I have broken down the data into decades to make it more understandable. Also I have doubled the final bar in the graph as we only have data for the first five years of the current data and I am assuming that the second five years will be at least as bad as the last five years. This is a reasonable assumption since the Navy is planning on greatly increasing the number of Growlers in the next five years. This will also greatly increase the number of Growler jet crashes. Hopefully, these Growler crashes – which are almost certain to occur and to be greater than two per year – will not occur in residential neighborhoods or wilderness areas. Instead, if we are wise, they will occur over deserts and other unpopulated areas where no people or wildlife can be harmed.

Here is the Table and Graph based on the table.